Head out on one of these day trips from Queenstown

Queenstown is New Zealand’s adventure capital. Set on the shores of glittering Lake Wakatipu, the city is surrounded by forested mountains and Lord of the Rings style scenery. There’s something to keep outdoor-lovers happy all year round, from skiing, cycling and rafting to hiking, bungy jumping and sky diving. Use Queenstown as a base to explore the South Island on day trips to historic gold mining towns, national parks and scenic sounds. 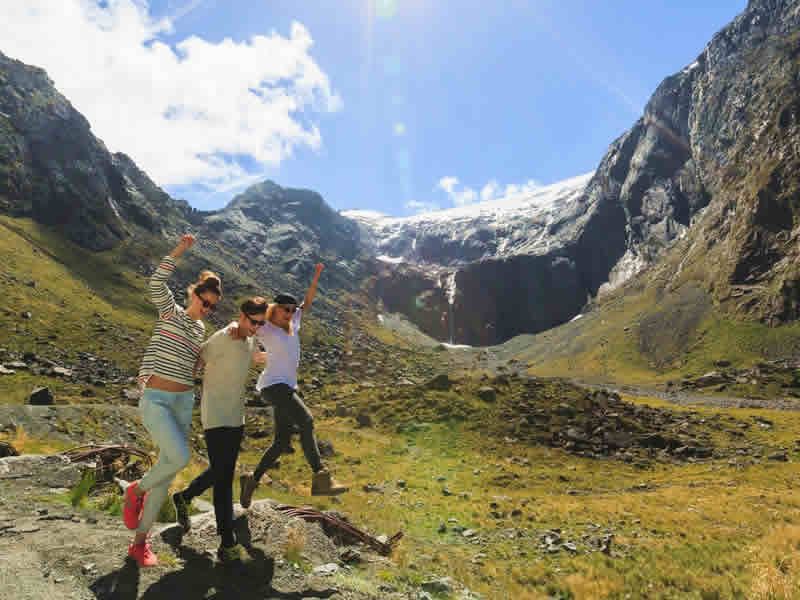 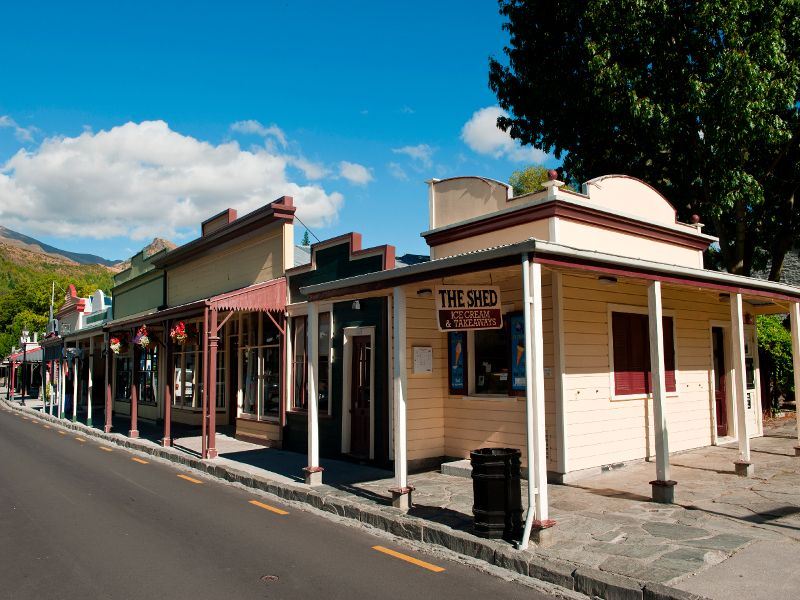 A 20-minute drive north will take you to the pioneering hub, Arrowtown. Back in 1862, thousands of miners flocked to the area in search of gold, which was once plentiful in the Arrow River. Dubbed 'where nature meets history', today the town is a well-preserved remnant of the South Island’s gold rush, built on the banks of the river. Wander around the vintage streets, art galleries, churches and cafés. Don’t miss the Lakes District Museum, which tells the story of the area’s history from its Maori roots to pioneering days. You can even have a go at gold panning in the river.

The pretty lakeside town of Wanaka lies an hour from Queenstown, skirting the edges of Mount Aspiring National Park. Nestled in the heart of the Southern Alps, Wanaka has stunning mountain views and a lively atmosphere, with lakefront bars and cafés. 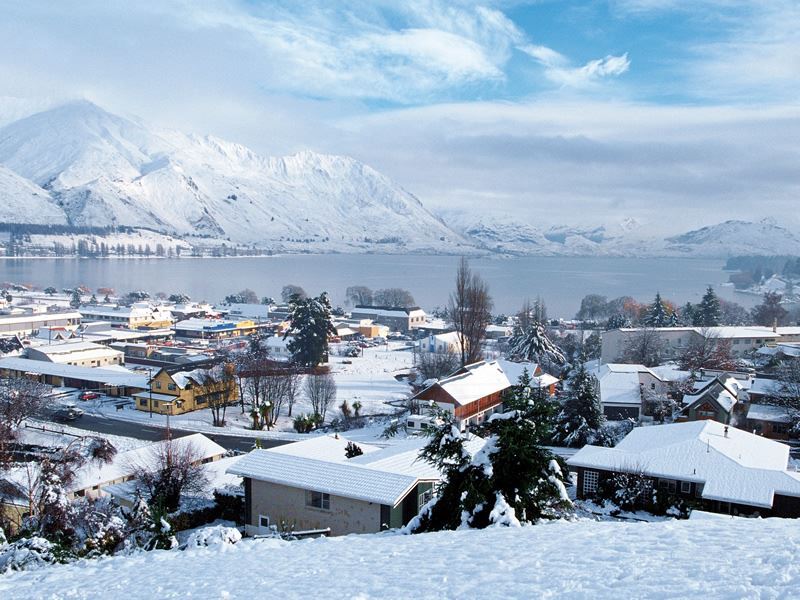 Take a lake cruise, do some water skiing or enjoy a jet boat tour along the nearby Matukituki River. Wanaka boasts over 750 kilometres of hiking trails, as well as wine tasting and Lord of the Rings filming locations in nearby Rocky Mountain and Treble Cone. For winter visitors, there are two ski resorts within 40 minutes' drive of the town. 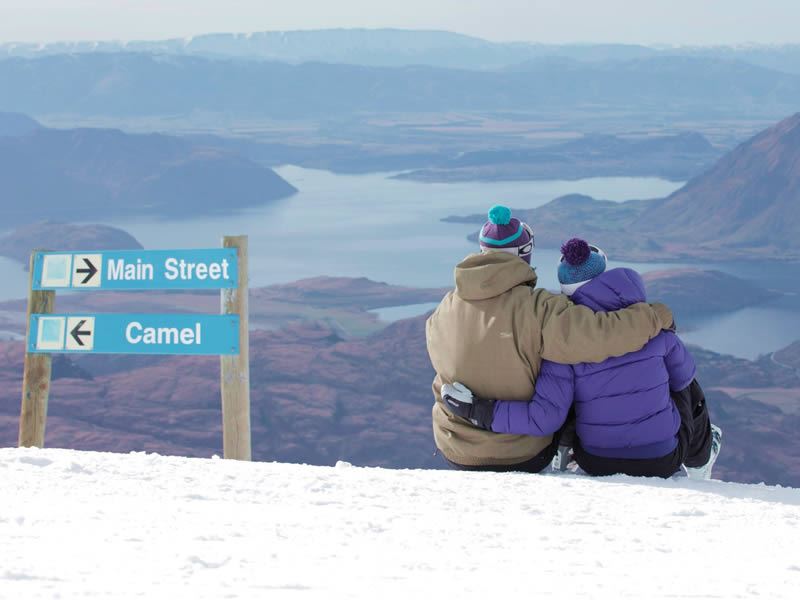 Mount Aspiring National Park is a true hiker’s paradise, located a two-hour drive from Queenstown. Named for one of the country’s highest peaks, the park is part of the Te Wahipounamu UNESCO World Heritage Area filled with towering mountains, valleys, glaciers and lakes. A day visit will give you a brief taste of the park, which stretches over 3,500 square kilometres, making it the third-largest park in New Zealand. Walk the 30-minute Blue Pools Trail through silver beech forest and over a swing bridge to the sparkling pools or try the half-day Rob Roy Glacier Track. If you can afford more time, tackle one of the park’s famous multi-day treks such as The Routeburn or Rees-Dart tracks. 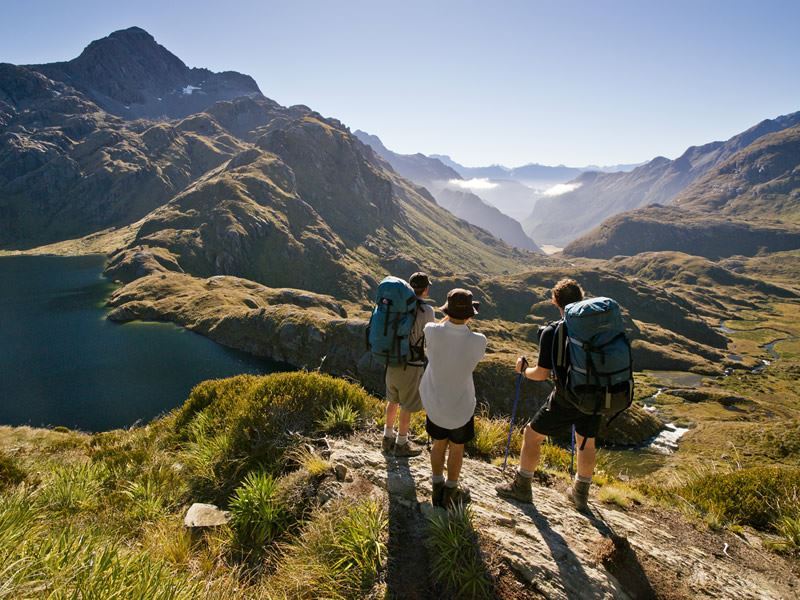 Looking for a scenic drive? Head 35-minutes north from Queenstown to Skippers Canyon Road. Perched high above the Shotover River, the road winds along the face of the deep canyon, which has a river running through the bottom. Amazingly, the road was constructed by hand using drilling and blasting techniques during the 1880s gold rush. Marvel at the dramatic scenery and stop off for views over the valley and across to the Richardson and Harris Mountains.

Drive the highest main road in New Zealand, which tops an altitude of 1,121 metres with staggering views of the Otago countryside. The Crown Range Road lies on the route from Queenstown to Wanaka but is best avoided in winter when you need snow chains. The Crown Range Road has some fine lookout points for views over Arrowtown and the Remarkables Range. Stop off at the iconic Cardrona Hotel to relish the scenery.

If you’re visiting Queenstown in the winter, a trip to the Coronet Peak Ski Area is an ideal day trip. This is the closest mountain to Queenstown, located just twenty minutes away, and it offers world-class skiing. The 2.8-kilometre-squared ski park has an elevation of 1,187 metres, with trails to suit all abilities. Coronet Peak has long opening hours for exciting night skiing, as well as kids’ programmes. 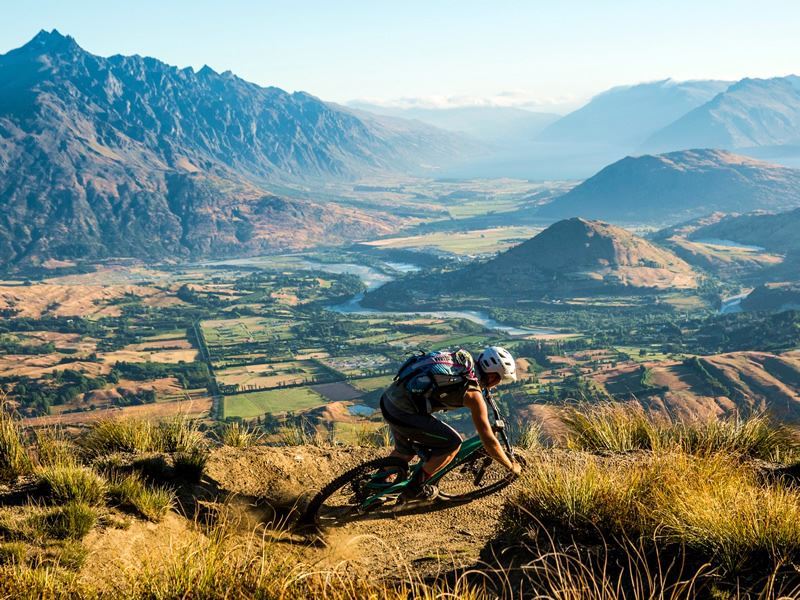 The cute town of Glenorchy lies just 45 minutes northwest of Queenstown. Set on the shores of Lake Wakatipu, the town is considered the gateway to Middle Earth. The flawless countryside scenery, snow-capped mountains, forests and lakes feature as backdrops for Isengard, Lothlorien and Amon Hen in the Lord of the Rings films. Glenorchy itself is a peaceful place to relax with a meal by the lake, horse trekking trips and kayaking. Some of New Zealand’s top walking trails such as the Routeburn and Greenstone/Caples tracks lie nearby.

Dubbed the eighth wonder of the world by Rudyard Kipling, Milford Sound is one of New Zealand’s most-visited attractions. Set in Fiordland National Park, you can get the best views of this 16-kilometre-long sound on a cruise or scenic flight. Day trips from Queenstown to Milford Sound are popular but long-winded, as the journey takes over three hours but there are impressive stop-off points along the way.

Sail over the blue waters surrounded by sheer, rainforest-covered mountains, passing by 1,600-metre-high waterfalls, spotting seals, dolphins and Fiordland Crested Penguins along the way. Bring a raincoat, as Milford Sound is also the wettest place in the country, with nearly 7,000 millimetres average annual rainfall, making those waterfalls all the more spectacular.

Kingston was once the key transport link from the gold fields in Wakatipu to shipping ports in Invercargill and Dunedin. This town is a great day trip option, situated just 45 minutes south of Queenstown between the Eyre Mountains and Hector Range, at the edge of Lake Wakatipu. Enjoy the leafy surroundings on foot or by bike, stop in at a little café, try some watersports on the lake or head to the nearby Eyre Mountains Conservation Park.

The Fiordland National Park is a must-see destination, taking up over three million square kilometres of the South Island’s west coast. Picture rainforests dotted with mountains, deep valleys, wetlands, waterfalls and of course, striking sounds such as Milford, Dusky and Doubtful which are best explored with a cruise. The park is a World Heritage Area located around two hours from Queenstown and boasts one of the tallest waterfalls in the country, Sutherland Falls.

Often referred to as the 'Walking Capital of the World', Fiordland National Park has over 500 kilometres of tracks and is home to some of New Zealand’s top treks. These include the Kepler and Milford Track, a 53-kilometre trail that takes around five days and winds through valleys, forests and across suspension bridges. 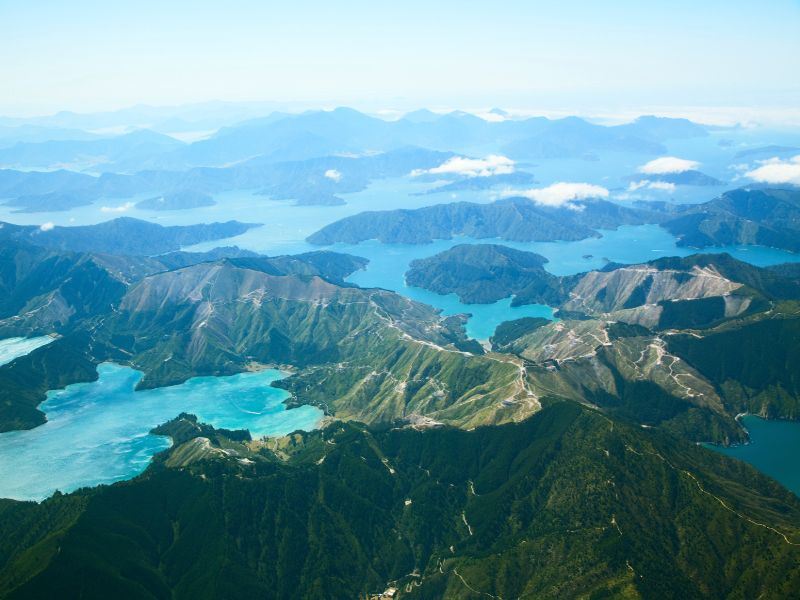 Milford’s lesser-visited neighbour, Doubtful Sound, offers a more remote experience for a day cruise. Doubtful is the deepest of New Zealand’s fiords at 421 metres and also the second longest at 40 kilometres. Sail across teal waters surrounded by steep cliffs and spot resident Bottlenose Dolphins, penguins and fur seals. The fiord is also home to crashing waterfalls such as Browne Falls, which soars to 619 metres. It can take two hours to reach Doubtful Sound from Queenstown, boat tours go from Deep Cove.

Te Anau is a gateway to the Fiordland National Park and a base for trips to Milford and Doubtful Sound. However, it’s also worth a daytrip from Queenstown for its amazing glowworm caves. 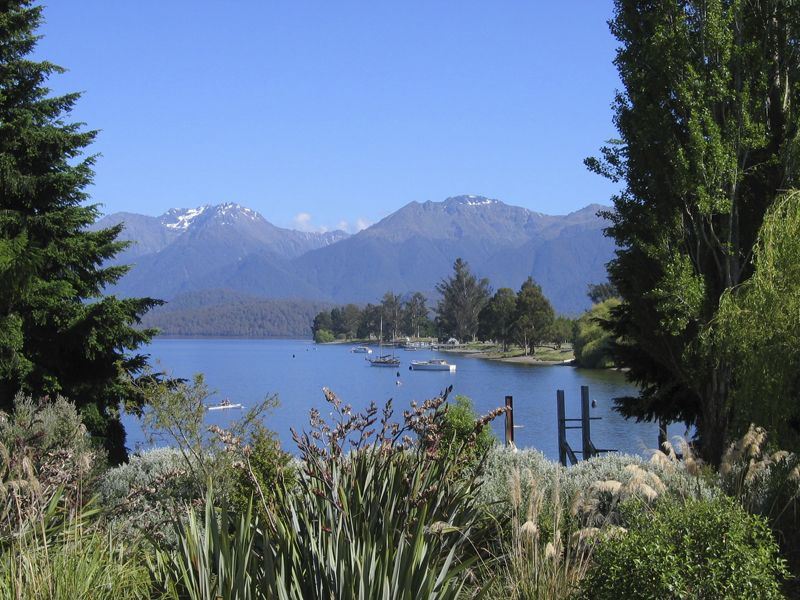 Take a boat trip through atmospheric limestone caverns, spotting intricate rock formations and thousands of glowworms lighting up the darkness. Other activities include horse treks over Te Anau basin, kayak tours and a chance to see the native Fiordland Crested Penguin. 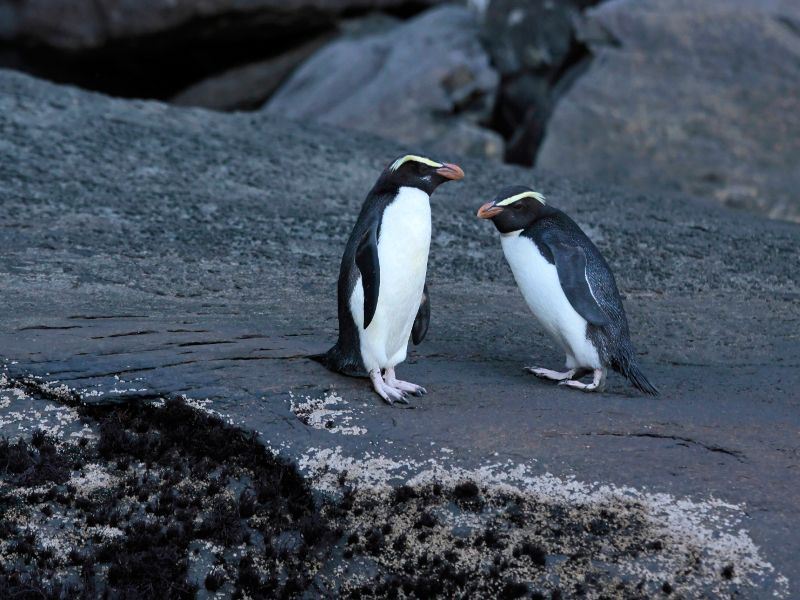 New Zealand is famous for its stellar wines, many produced in the South Island’s Gibbston Valley. This wine growing region is known as the 'Valley of the Vines' and is home to 12 vineyards. The Gibbston Valley is set between mountains and the Kawarau River Gorge in a high-altitude area, which creates superb conditions for Pinot Noirs, as well as Chardonnay, Rieslings and Sauvignon Blancs.

Head just over an hour southeast from Queenstown through the Gibbston Valley, passing towns like Cromwell and Bannockburn, until you hit Alexandra. From there, you can explore walking trails and cycle to wineries, sample Pinot Noirs and taste locally-grown fruits. Alexandra dates back to the 1880s, when gold was discovered in the nearby River Clutha, which you can now cruise to see old mining sites.

If you love mountain biking, then head to the Otago Central Rail Trail, a 152-kilometre track. This now defunct railway line was constructed between 1891 and 1907 to link Dunedin and Otago and is still referred to as 'New Zealand’s Great Ride'. Today, it rivals the West Coast Wilderness Trail as a cycling destination, passing through countryside, towns, gorges, tunnels and across viaducts. The full trail takes at least four days to ride, but you can make a day trip from Queenstown, driving an hour to Clyde, for an eight-kilometre cycle to Alexandra over the Muttontown Viaduct.

The Remarkables Ski Area is another good option for winter snowsports. Located just a 30-minute drive east of Queenstown, the area has recently benefitted from a huge investment and boasts high speed chairlifts and runs for all abilities. Families can enjoy the gentle slopes, while there are plenty of freestyle areas and off-piste runs for seasoned pros. The Remarkables is surrounded by magnificent alpine views. 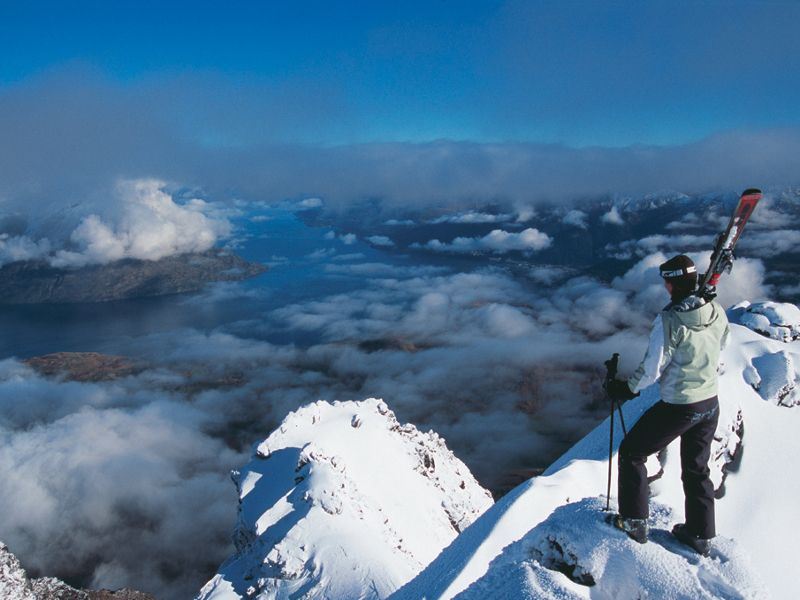 Just under an hour’s drive east from Queenstown you’ll find Kawarau Gorge and River. A prominent spot in the Otago gold rush of the 1860s, you can still see old miners’ cottages along this rugged gorge, which runs through Gibbston and into the upper valley of the River Clutha.  Stop in at the Goldfields Mining Centre to learn more about the area’s history and tour mines and tunnels. Kawarau Gorge is a haven for daring river surfers, who you can watch from a viewing platform at Roaring Meg lookout point. Adrenaline junkies can stop at Kawarau Bridge for a notorious AJ Hackett bungy jump, the birthplace of this crazy sport.

Heading south to Invercargill? Follow some of these stops on the Southern Scenic Route: 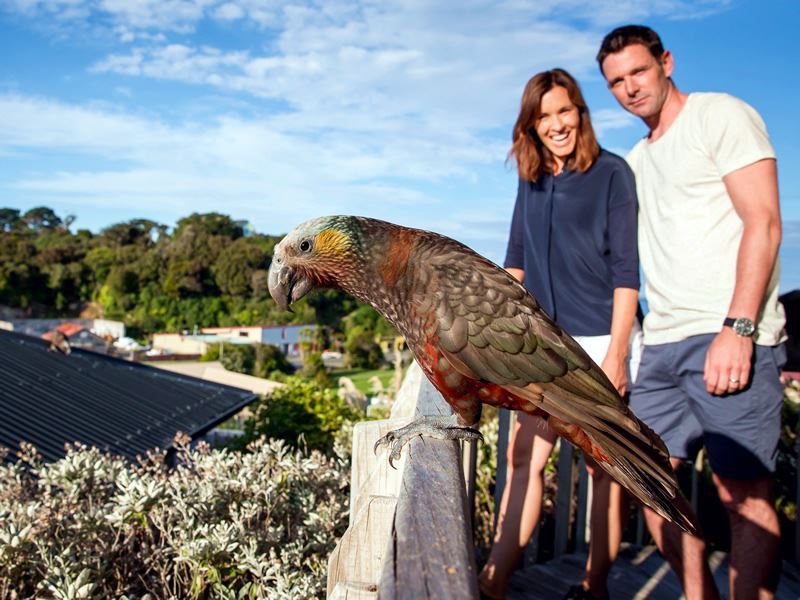 Stopover suggestions heading from Queenstown to the north island

If you’re heading up from Queenstown to the North Island, here are some stop-off suggestions:

Find more suggestions in our South Island Coast to Coast, Length and Breadth of New Zealand or Classic New Zealand self-drive itineraries, which take in highlights of the North and South islands.

Top 10 things to do in Queenstown Read more
Exploring Fiordland National Park, New Zealand Read more
Getting around Queenstown and where to stay Read more
Find your perfect holiday