Top 10 things to do in Rotorua

Fondly known to the locals as ‘Sulphur City’, Rotorua sits atop a volcanic caldera that is responsible for the town’s thermal activity such as mud baths, geysers and hot springs, as well as the fabled Pink and White Terraces that were one of the area’s most celebrated natural attractions until they were buried in a 19th century earthquake.

Long a popular spa destination, Rotorua is at the heart of New Zealand’s ‘Lake District’. There are around 15 lakes of varying sizes in the vicinity, the largest of which is Lake Rotorua, which offer plenty in the way of scenic sightseeing and watersports. Rotorua also plays a significant role in Maori history and tradition, and there are many cultural experiences to explore in the town and the surrounding area. This is a must-see place on any tour of New Zealand’s North Island, so to help you plan your itinerary, here are 10 of the best things to see and do when visiting Rotorua. 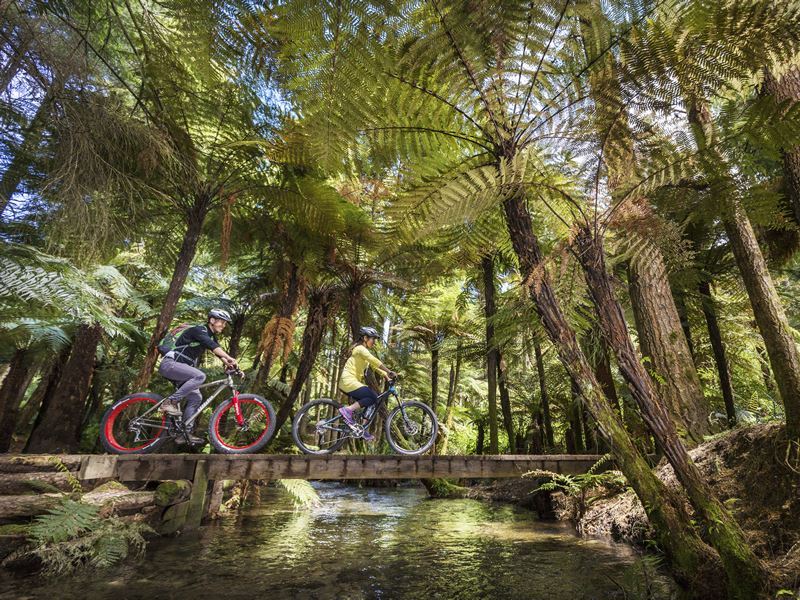 What: Te Puia is a famous geothermal area near Rotorua. The largest active geyser in the southern hemisphere, Pohutu, erupts several times every hour. Maori people still use the waters here for bathing, cooking and making handicrafts to this day. You can see traditional Maori carving and weaving skills in action, and try an Ingo meal, cooked by lowering a basket full of meat and vegetables into the boiling water of Ngararatuatara hot pool.

Highlights: While Rotorua museum is currently closed to strengthen it against earthquakes, you can get another glimpse of fascinating history at Te Wairoa. ‘The Buried Village’ is a working archaeological site showcasing the excavated remains of a settlement that was destroyed by an 1886 volcanic eruption, one of the worst natural disasters in New Zealand. The Pink and White Terraces, known as ‘the eighth wonder of the world’, were located here and sadly disappeared in the same event, although efforts to excavate them again continue. 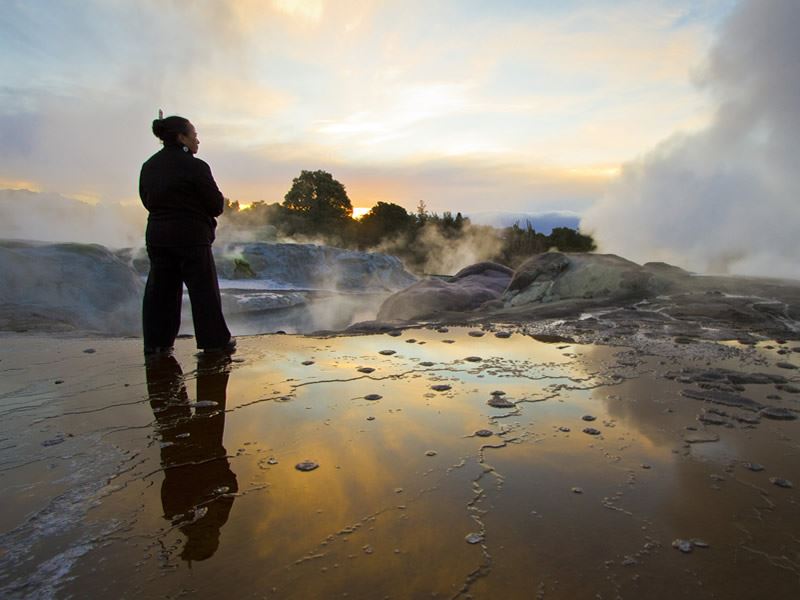 Meet the wild, and not so wildlife of Rotorua

Where: Various locations across Rotorua

What: Most guidebooks will tell you that New Zealand has more sheep than people, but they can’t immerse you in the country’s wildlife the way that getting out and about in nature around Rotorua will. Just a short distance from the town centre and set in acres of beautiful rural landscape, the Agrodome has a farmyard nursery that is hugely popular with families. Children can pet lambs, calves, goats and puppies, take a wagon ride around the fields, and watch a live sheep-shearing show.

Highlights: Rainbow Springs Nature Park is home to the world’s largest kiwi hatchery. The national bird of New Zealand is a flightless, nocturnal creature with an incredible sense of smell. The chances of seeing one in the bush are very remote, so this may be the best place to go if you’d like to meet the cute little critters.

Down and dirty fun at Rotorua mud baths

What: The North Island boasts many fantastic hiking and mountain-biking routes, and if you’ve spent some time out on the trail then the chances are you’re feeling a little sore. A good soak in a Rotorua mud bath is the best way to soothe aching muscles, as well as revitalising your skin, and it can also be a useful treatment for conditions such as arthritis and rheumatism.

Highlights: The most popular mud baths in Rotorua are those of Hells Gate, where the mineral-rich muck comes in grey, white and black. Rub it all over your skin, enjoy the absorbing geothermal scenery for a while, then clean yourself up beneath a refreshing waterfall. For the full effect, several Rotorua mud baths offer you the chance to combine your soak with a relaxing dip in a hot spring, or a traditional Maori massage that employs indigenous herbs. 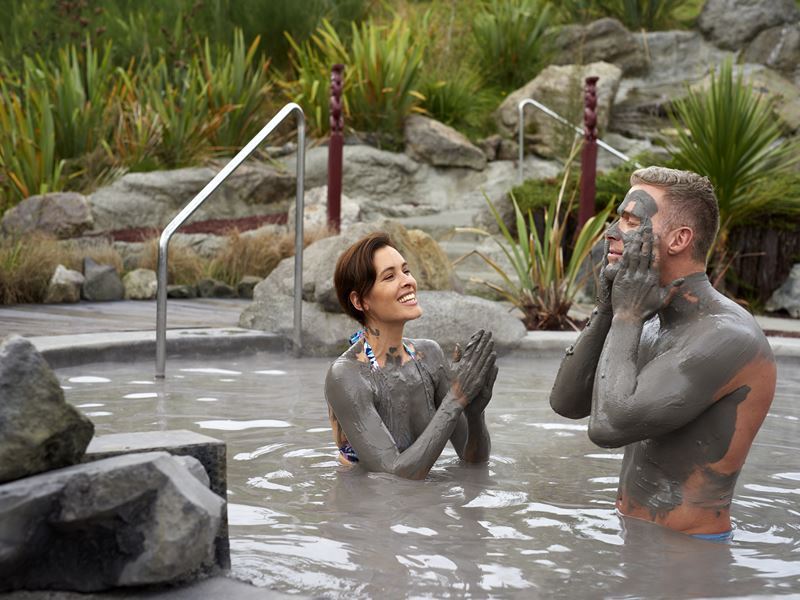 Bathe in a legendary hot pool on Mokoia Island

What: This tiny but picturesque island is formed by a lava dome protruding from Lake Rotorua, and holds great historic and strategic significance. Maori tribes fought over it several times - the name ‘Mokoia’ itself relates to the death of a warrior in one battle. An ancient Maori legend attached to Mokoia Island has parallels with ‘Romeo and Juliet’ - Hinemoa and Tutanekai were two young lovers from opposing tribes, with Hinemoa living on the mainland and Tutanekai on the island. Forbidden by her father from making the journey, Hinemoa swam across at night guided by the sound of Tutanekai’s flute. Luckily, today it’s much easier to get there, with a bumpy jetboat ride being the most exciting option, leaving from the lakeshore.

Highlights: Popular activities on Mokoia Island include bush walks, during which you can see and hear many species of birdlife, some of which such as North Island robin and the weka woodhen are endangered. You can also take a dip in a hot pool called Wai-Kimihia, also known as ‘Hinemoa’s Pool’, where as the story goes she warmed up after her swim. 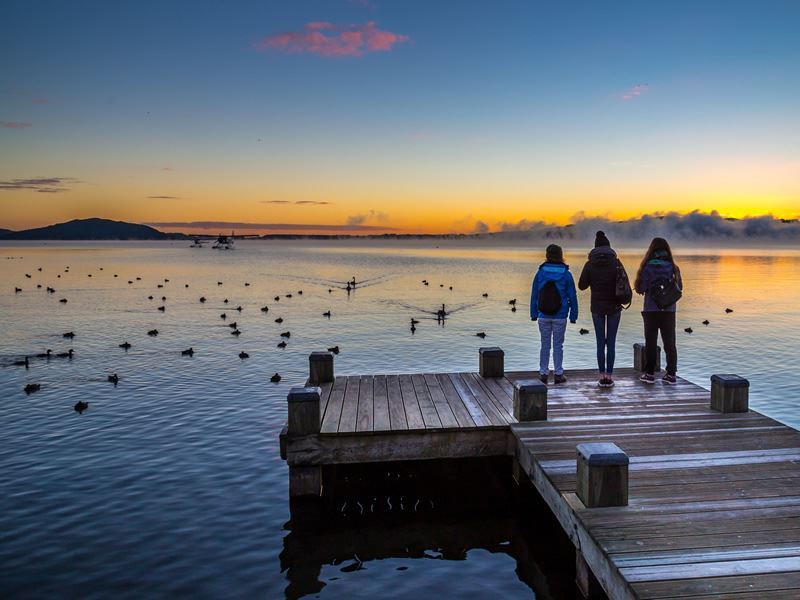 Visit New Zealand’s most stylish public baths - and make a day of it!

What: Rotorua’s most glamorous bathing spot opened its doors in 1933, the first place in New Zealand to offer mixed-sex baths, which at the time was very daring. Their stunning Art Deco and Spanish Mission stylings were inspired by Californian design to distract from the Great Depression, and made this one of the country’s most popular visitor destinations back in the day. Note that the water in these geothermally heated pools has no minerals - the Blue Baths were for recreational bathing rather than medicinal purposes.

Highlights: If you plan to visit the Blue Baths then why not make a day of it. Enjoy lunch in a classic tearoom, then change into evening wear for one of many regular evening events including musical performances, stand-up comedy and tasting menus. 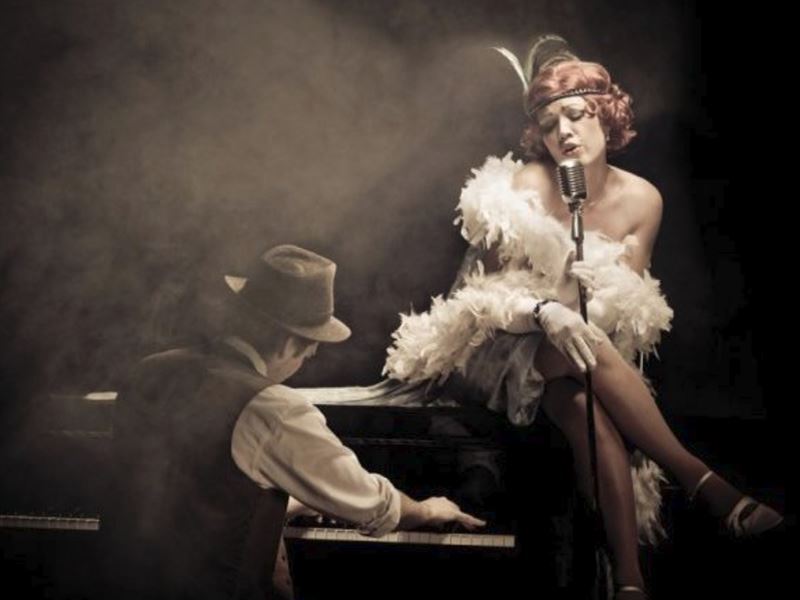 Make a splash with some classic New Zealand watersports

What: Rotorua offers a dazzling array of watersports on its lakes and rivers, from the active to the more sedate. Thermal pool safaris are a popular activity here, as are sunset kayaking trips on Lake Rotorua. Jet boating is another extreme sport that was invented in New Zealand and you can take a spin on one of these turbo-charged speedboats in many locations around the country. Rotorua however is the only place where you can combine your trip with ‘the Squeeze’, where you’ll make your way through a narrow crevice in a cliff, wading through waist-deep water to a natural hot spring filled by two cascading waterfalls. Not one for the claustrophobic.

Highlights: Tutea Falls on Kaituna River is the world’s highest commercially rafted waterfall, and tackling it provides an incredible rush. There are another two falls to negotiate in the gorge as well, and you’ll need to work as part of a team along with your guide in order to reach the finish line (relatively) dry. 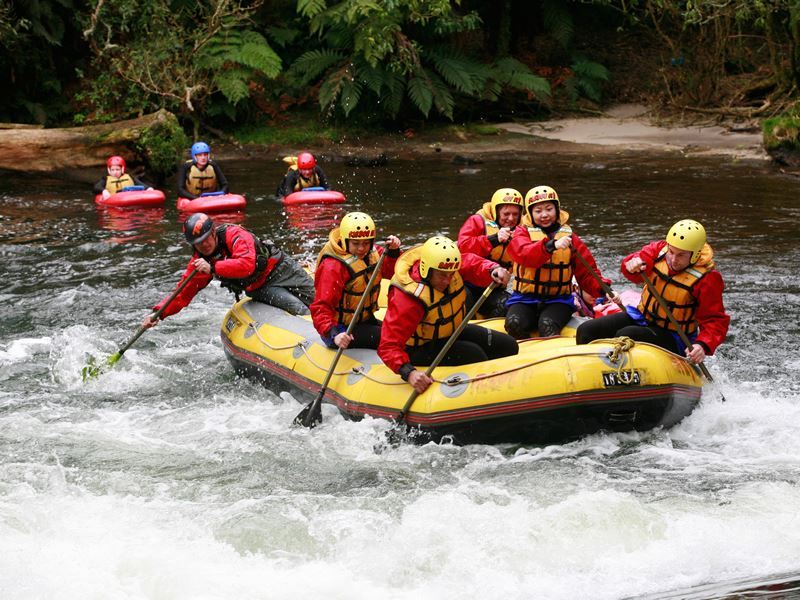 Take to the trees in Whakarewarewa Forest

What: Whakarewarewa Forest, known to locals as ‘the Redwoods’, is just five minutes from downtown Rotorua and so-named for the California Coast Redwoods that tower up into the sky all around you. Attractive woodland trails abound here, serving everyone from hikers to horse-riders, and the forest also has many renowned mountain biking tracks that provide a challenge for every level of ability and fitness.

Highlights: The Redwoods Treewalk is an exhilarating canopy tour, where you walk along more than 20 elevated suspension bridges that take you up to 12 metres off the ground. This is a must for anyone wanting to get a different take on the forest as well as a deeper understanding of the ecosystems at play here. The Treewalk can also be done in the early evenings, when the journey is lit by beautiful lanterns suspended from the branches. 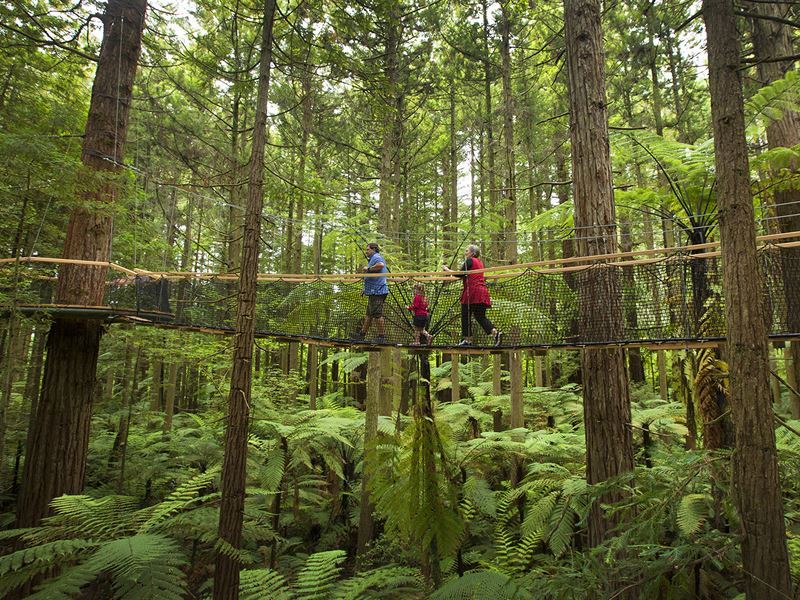 Get your adrenaline fix at Rotorua’s finest adventure park

What: Queenstown might be the adventure capital of the South Island, Rotorua has it more than covered on the North Island. There are plenty of adrenaline-charged activities to be found all around the town, including parasailing on Lake Rotorua and luge (part go-kart, part toboggan) in Redwoods Forest, but don’t miss Agroventures Adventure Park, just a 15-minute drive north of Rotorua around the edge of the lake. Here you’ll find a 43-metre bungee jump which for the uninitiated is a good way to take the plunge with a drop that’s still challenging but not outright terrifying. There’s also the Shweeb, a pedal-powered monorail track where you race against someone else; a super swing that launches you into the air at speeds of up to 80mph; a freestyle mountain bike circuit finishing with a leap into a huge airbag, and an outdoor wind tunnel where you can get the sensation of skydiving without the hassle of actually having to jump out of a plane!

Highlights: While the bungee jump is probably New Zealand’s most renowned contribution to the field of extreme sports, we believe that the joyful lunacy of Zorbing should get more recognition. If you’ve never heard of Zorbing before, essentially it involves being strapped inside a gigantic inflatable ball and rolled down a track at speed, with the option of having some warm bubbly water splashing around inside too if you want it to get even weirder. 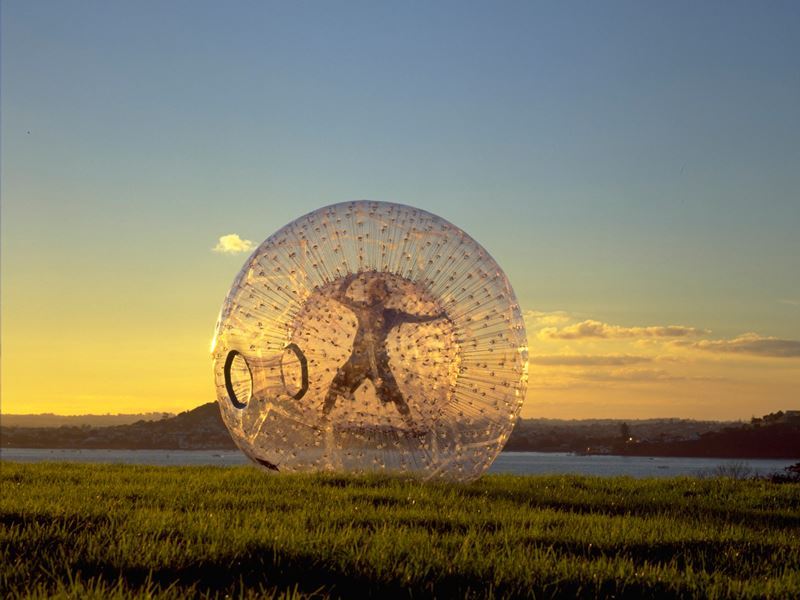 What: Rotorua has always been a revered location for New Zealand’s indigenous peoples, and over a third of the town’s current population is Maori. Various fascinating cultural experiences can be found dotted around Rotorua and its outskirts, but the best-known is Mitai Maori, where you can experience life in a traditional Maori village through a series of entertaining encounters. Watch as warriors in full battle dress paddle along the river in an ancient hand-carved canoe; learn about Maori customs and legends through music, dance and storytelling around the firepit; discover the significance of Maori tattoos and weaponry, and feel your spine tingle as you take in an enthralling haka performance.

Highlights: Maori Manaakitanga (hospitality) is well-known, so make sure you finish your cultural encounter off with a hangi meal. Lamb, pork or chicken together with vegetables is cooked over several hours by resting a basket on top of hot stones in an earth oven. The smoky fragrance that infuses the meat during the process gives it an intense and unforgettable flavour. 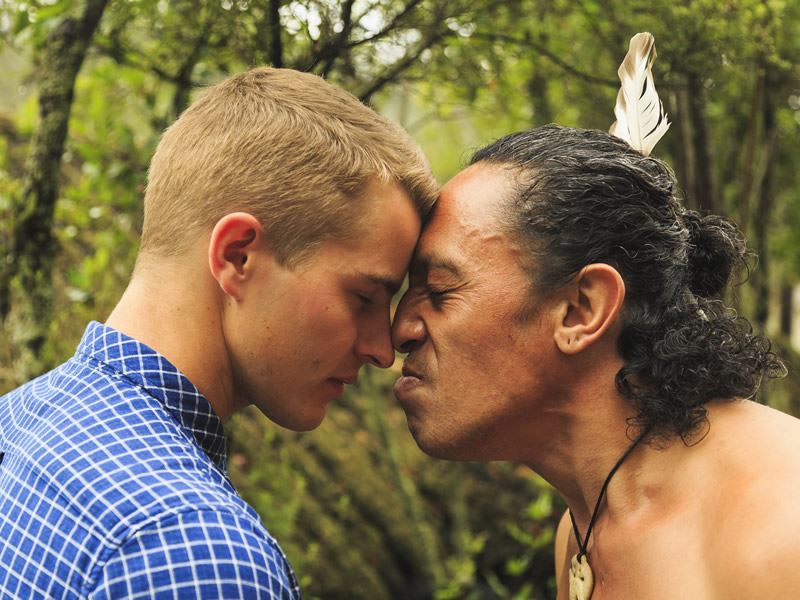 Let off some steam at Wai-o-tapu Thermal Wonderland

What: A spectacular geothermal area just a short drive south of town, Wai-o tapu bears some resemblance to the landscape of Yellowstone National Park, albeit on a much smaller scale. Beyond hot springs, gushing geysers and bubbling mud pools (including New Zealand’s largest) there are several colourful terraces to be seen here, as well as many other spellbinding volcanic features. Expect to be wowed.

Highlights: Unlike most other thermal features in New Zealand, the Lady Knox Geyser has no Maori name, because it wasn’t found until the 20th century. Eruptions take place at 10.15am and are always on-time, since they are artificially induced, a technique first discovered by a group of prisoners washing their clothes in the hot water. Natural or not, it’s still an immensely impressive spectacle. 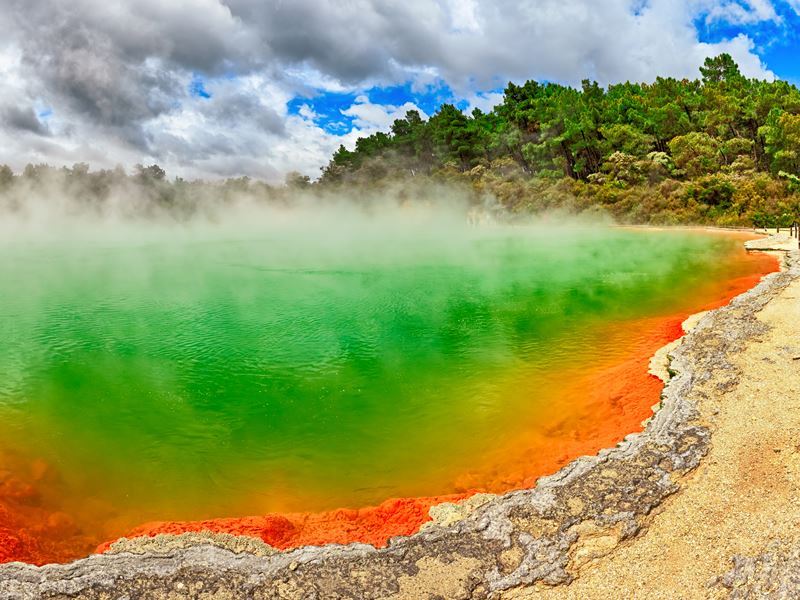